Already Been Chewed on using animation to help Wolverine launch products in a whole new way.
By Meleah Maynard

Wolverine is mainly known for making tough work boots, which they promote in traditional ways. Recently, though, the company partnered with Already Been Chewed (ABC) on a new series of product launches that embraced 3D to show off product features in imaginative new ways.
The first launch was for the HELLCAT, a rugged boot with a comfortably cushioned footbed. Wolverine knew they wanted to do something that highlighted the technology behind the shoe, so ABC came up with the idea to tell the HELLCAT’s story in a dramatic, photorealistic way using Cinema 4D, After Effects, Houdini, and Redshift.

We talked with ABC Founder and Creative Director, Barton Damer and Mark Fancher, ABC’s lead VFX artist, about the making of the HELLCAT product launch, as well as how ABC works closely with clients to keep projects on track.

Barton, had you worked with Wolverine before?

Damer: No. But we had approached them in the past, knowing they were a brand that we wanted to work with. So when this project came up, they got in touch and we’ve been working with them on a lot of other things since. They’re very prepared, and a lot of the work we’ve done for them won’t even be released until spring of 2021. Having so much time to do things in advance is great because usually everything is so rushed.

Describe the storyline for the HELLCAT launch.

Damer: Wolverine gave us a brief that listed the features of the shoe. The goal was to show that the HELLCAT is a work boot, but it’s also a comfortable shoe. A lot of thought went into the storyline. We wanted the visuals to be entertaining, so we pitched everything from using Army tank armor to show how much the shoe protects the foot, to floating clouds for the soft, cushioned insole. We also tried to match the vibe of the brand, and we knew they used photography and had specific ways of lighting things. As a brand, they were excited to move into 3D storytelling, and it was a fun process because they were very open. 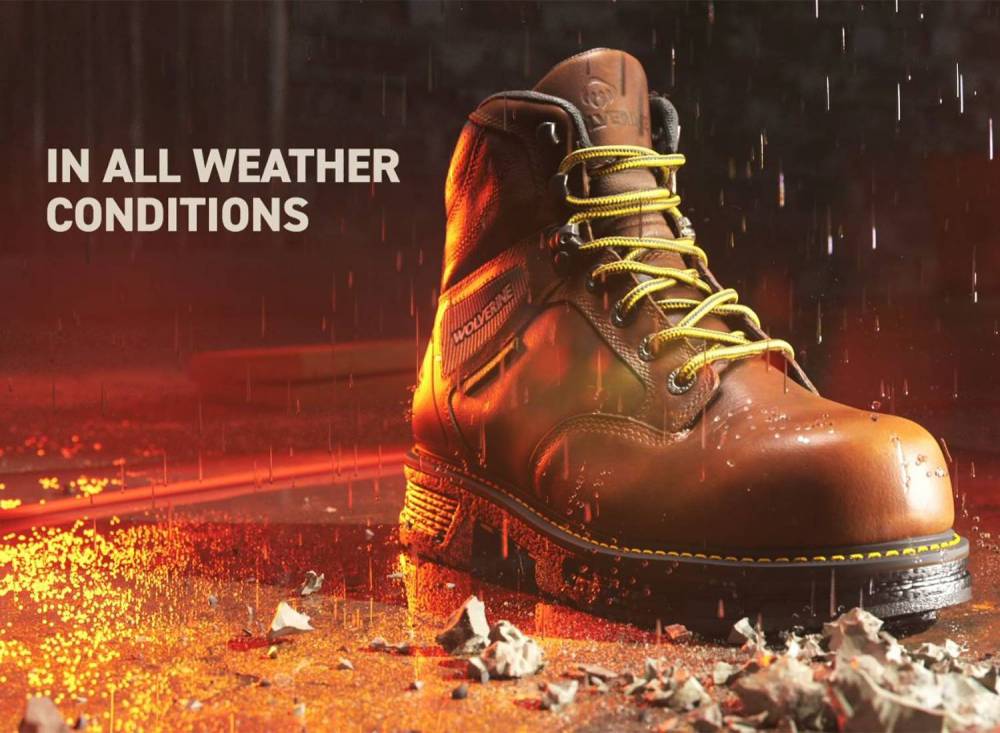 So many brands are stuck in their marketing ways, but it seems like more are reconsidering their options, especially right now since the coronavirus has made it difficult to do shoots. But even before that, people seemed increasingly willing to try 3D animation. I think that’s going to grow and, if that happens, I may need to hire another artist or two. We’ll have to get through some of this uncertainty to really see what’s going to happen.

Tell me about your process. How do you keep clients involved along the way?

Damer: We always like to divide our projects into phases, starting with concepting. For us, the concept phase is not just about the scripting. We use that phase to really think about what a spot will look like from a creative standpoint. Exploring that usually starts with a hero image of the product, and we build the 3D environment around that go get approval for the look of the overall spot.
It’s really important to get approval at several points along the way. We get feedback from our clients on what we call the concept board. For the HELLCAT spot we showed them a hero shot of the boot, and several shots happening over time, starting at sunset and during a rainstorm. Every part of the story shows that the shoes are durable, waterproof and comfortable. Once we got signoff on the concept board, we moved on to each shot of the project, so we could choose our camera angles and develop a low-res animatic.

We always do an animatic to get approval on the timing; that way we know what to focus on and for how long. We don’t put in a ton of detailed animations until we get signoff, and once the animatic is approved we enter the style board phase. That’s where we go into each shot and dial in the final lighting and make adjustments to look development and cameras. Each shot gets its own high-res style board so they can approve every angle and the lighting on the product.

Having an approved animatic makes the animation phase much easier. That way, if you make a detailed animation in Houdini that is four seconds long, and they decide later they want eight seconds, you can remind them that they approved four, and that’s what you did. Getting all of those approvals from the start is what keeps us from burning out. If clients want to change things after everything has been approved, we explain that they can do that, but we’ll need more time and it’s going to cost more money. It’s unfortunate that a lot of studios don’t do that.

How did your team create the scene with the tank armor around the HELLCAT?

Damer: The environment was inspired by an alley in Dallas that I walked by about a year before this project even happened. I stopped and took a few photos because I thought it was such a cool space, and then this project came up and I thought it was so perfect because it had a modern vibe and also kind of looked like a construction site.

The 3D environment was created using Cinema 4D, Redshift and various textures from Quixel Megascans, Poliigon, and Real Displacement Textures. Our lead modeler, Thomas King, created the military-looking armor around the boot with ZBrush and 3D-Coat. The rocks were originally created in C4D using photo textures and basic geo displacement. Those were exported to Houdini where all of the detailed smashing simulations were created. 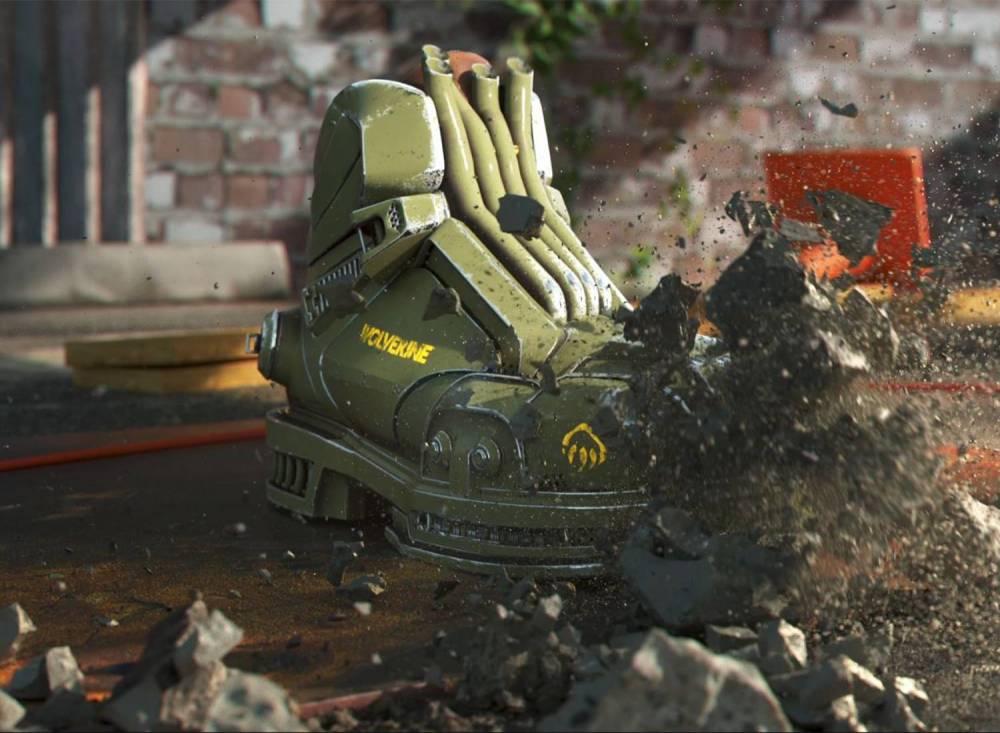 Describe how you made the cloud scene showing off the soul of the shoe.

Fancher: We were trying to show that it’s a heavy boot with a light, cloud-like insole.
Smoothly morphing the midsole from polys into voxels was tricky. We started by deforming the midsole geometry into the rough shape of a cloud. As it was transitioning, we started emitting smoke from it in Houdini. To smooth the transition further, we animated a bunch of parameters of the midsole shader in Redshift to meet the cloud-look halfway, as it gradually disappeared. We had to render it out a few times quickly in low-res to check how our key frames were affecting our shaders. A few years ago, this would have been a comp-only trick! 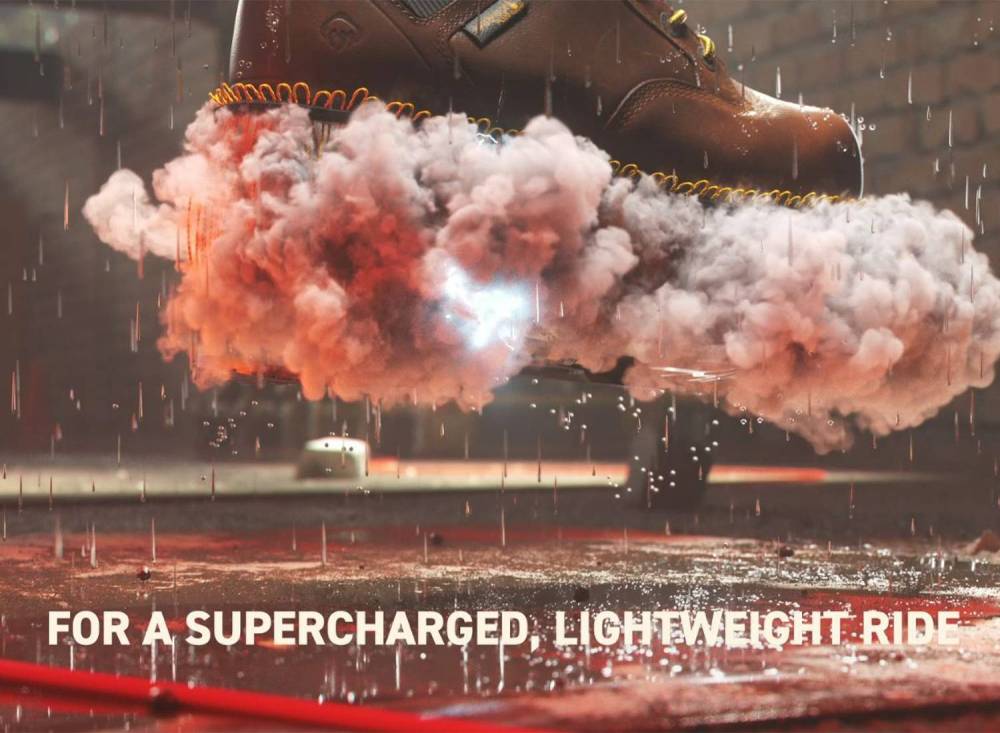 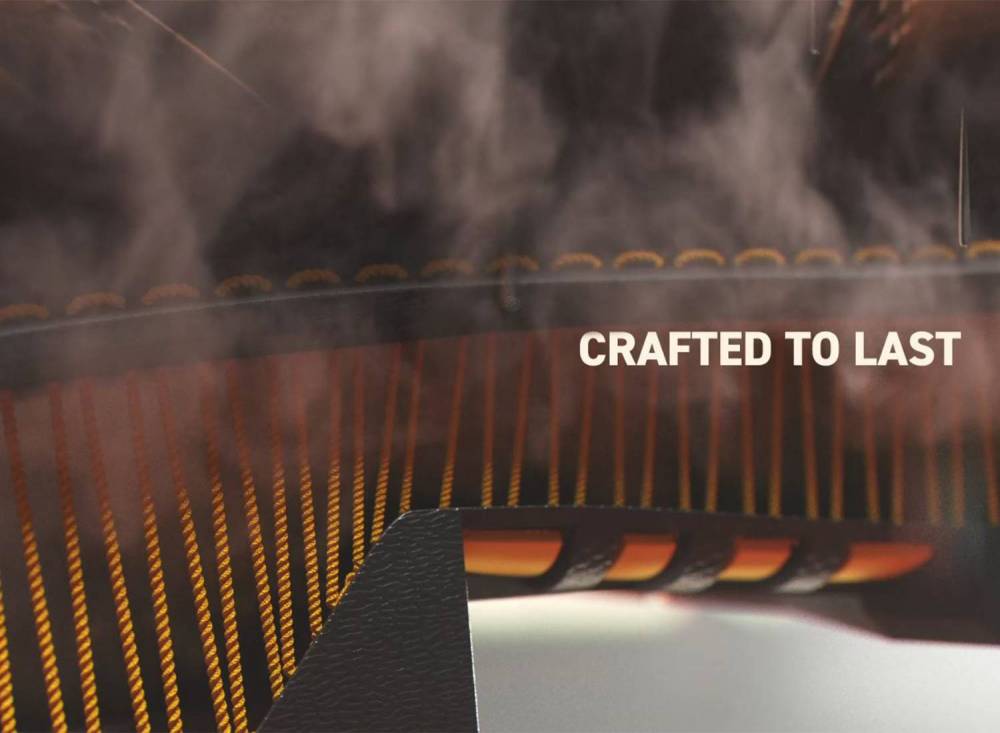 Damer: GPU rendering with Redshift makes it possible for us to do so much more storytelling in a short time. We now have the power to create feature films that just happen to be 30 seconds long. For me, this project was a manifestation of all of the investments we’ve made in a talented team and equipment over the years. We’re doing entertainment advertising, really. It’s not just eye candy, it’s a whole different way of marketing that is much more modern and visual.

It’s also worth mentioning that the creative we’re doing for Wolverine is being used for their full campaign, everything from looping animations to massive renders for print and tradeshow booths. It’s super cool to be able to render something from a video and be able to put it on the side of a building. You don’t normally think of 3D animation translating to print in that way, but it’s becoming more common.

We bring it up and a lot of clients like the idea that we can help them think through an entire campaign so there is one cohesive vision. Cinema 4D has played a huge role in making that possible because we can do such high resolution, and Wolverine has been a great client. Their team has been great to work with, and they’re excited about doing new things.