Making magic behind the scenes

Painting Practice on being the bridge between traditional and digital art departments for high-profile TV and films.
By Meleah Maynard

Mick Jagger, David Bowie, Bob Dylan, Ray Charles — and so many others — had exceptionally talented backup singers who helped make them famous, though those singers are much less well known. In truth, the same thing could probably be said for most artistic genres and, fortunately, there are events that help recognize some of those unsung folks, like the British Academy Television Craft Awards.

Presented by the British Academy of Film and Television Arts (BAFTA), the craft awards celebrate the talented people behind the scenes in TV. Recently, the creative studio, Painting Practice, was among those who were honored during an award ceremony that was broadcast online. Together with Framestore, Painting Practice took home the award for best Visual and Graphic Effects for the popular series His Dark Materials. And, together with Elastic, the studio also won the Titles and Graphic Identity award for the series’ main titles. 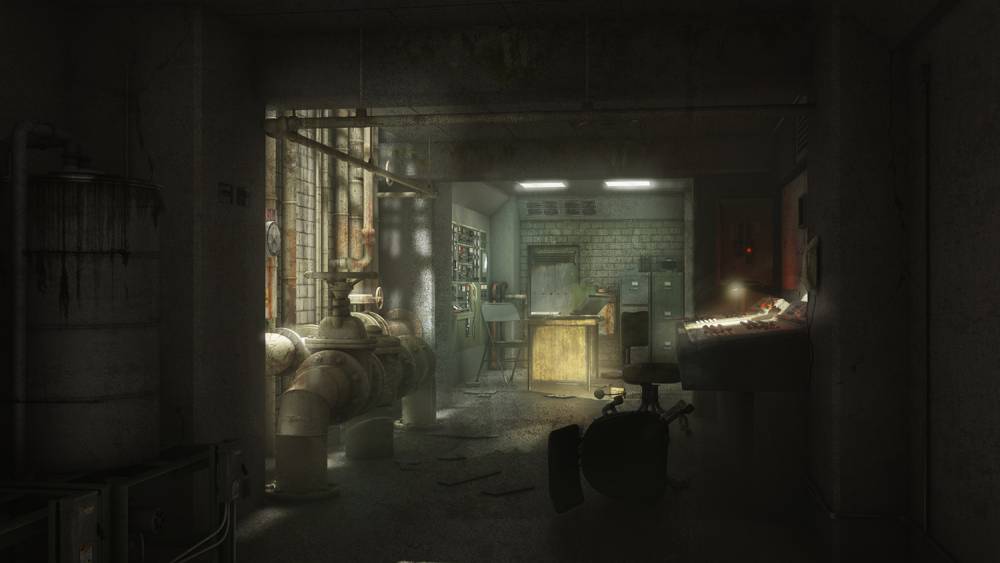 Painting Practice was uniquely qualified to create the design of the main titles and help pre-visualize the entirety of the series. The studio has been using Cinema 4D, Unreal Engine and other tools to design and visualize enormous sets and complex action sequences for His Dark Materials for years. Based on Philip Pullman’s bestselling novels of the same name, the show takes place in a mythical universe of expansive landscapes and a CG cast of creatures that includes armored polar bears, demons and witches.

We talked with Dan May, co-founder of Painting Practice, about the studio’s process for working behind the scenes on high-profile TV and film productions, including His Dark Materials, Black Mirror, Watership Down and Beauty and the Beast. Here he breaks down the studio’s role in general, as well as specific aspects of their work on His Dark Materials and Black Mirror.

Dan, what makes Painting Practice unique and helps get you high-profile work?
One of the big things that makes us unique is our background in both live action and animation, which allows us to sit in both worlds, shooting and animation. We’re able to take our processes in animation color scripting and key frame art and bringing those into live action. And because we make drama, we’re able to bring a lot of that work into our animation jobs. 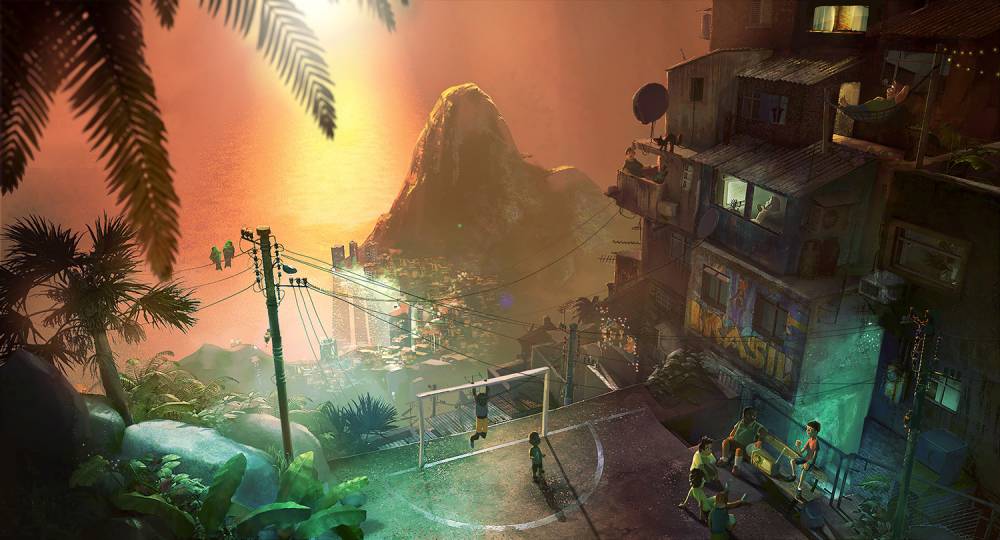 We believe that good storytelling depends on design-led environments and previz. I’ve always been a huge fan of 3D and I started using Cinema 4D out of college, which I left to work on films. At that time, I was doing a lot of traditional drafting work, things like doorknobs and window details when I wanted to be visualizing sets. Then, I met Joel Collins, who would become my business partner. He could see potential in the CG work I was doing and, together, we got into doing previz and designing visuals of what VFX could look like, as well as more traditional set designs.

The two of us together have a lot of different skills so we can do previz, VFX, animation, production design, motion graphics, concept art and digital matte painting. In the end, the bread and butter of our work is design that includes a tech side to it, particularly environment design and world building. I’m interested in how to keep ahead of changing technology, and I live for that because, good or bad, that’s where I thrive. We’re always trying to discover ways to do things faster and better, and that’s what clients are asking for more and more. 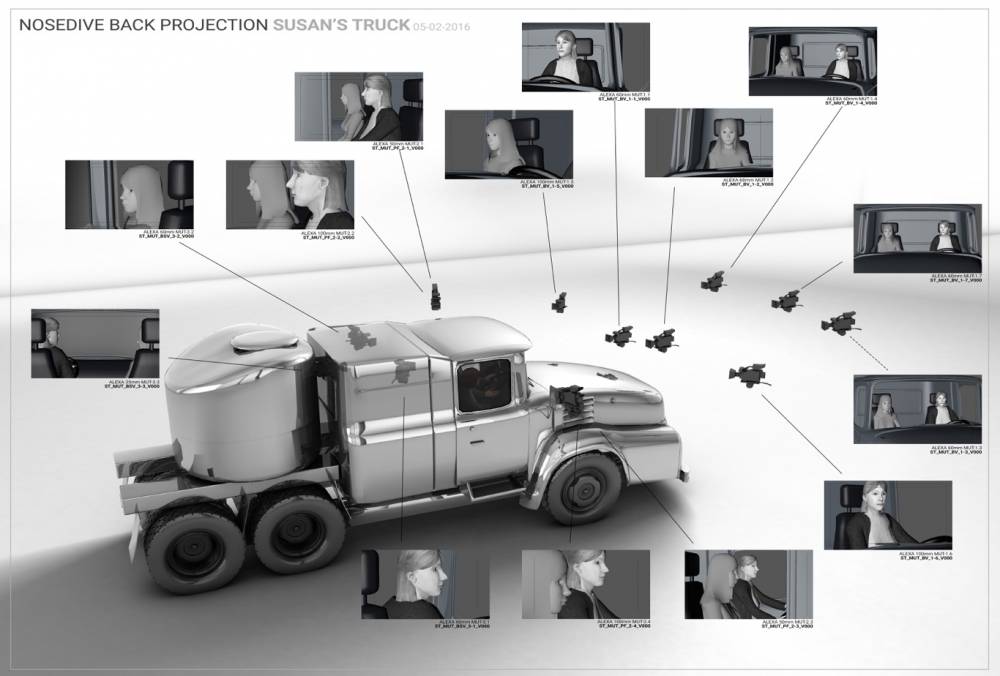 That’s in part why you launched Plan V, right? Talk about what Plan V is.
Plan V is a new software app that’s powered on Unreal Engine. We’d already been doing more real-time rendering, and we wanted to find new ways to expand the use of real-time technology in the industry. So we created Plan V, which is more of a whole platform than just an app. It’s a virtual studio environment that artists, directors, producers and many others can use to experiment with storyboards, previz and a lot of other things. It can be used for designing sets, worlds and scenes for TV, films and games.

The idea came to us while working on His Dark Materials and we thought, ‘how can we visualize very complex CG scenes and sets ahead of time without taking the risk of shooting/building them wrong?’ That’s when I realized we could take the same tools Hollywood used on Avatar, or other big CG- VFX-heavy movies, and make something affordable and efficient for TV—sort of previz on steroids. The main use of this new software is to help us present and interact with our clients in a more collaborative and hands-on environment. It helps creatives explore options and ideas, while keeping an eye on expenses ahead of time, because you can better understand what is achievable and what isn’t, allowing you to make the best production-creative-value decisions for the show, or movie.

Describe how Painting Practice fits into the pipelines of big productions.
We are the bridge between the traditional art department and the digital art department. During pre-production we liaise with the art department, designer and director to figure out what they have in mind and consider what we can build and what we need to do in CG based on the budget and time. I work with the director to see what is achievable, and then we break that out so vendors can see what they need to make and what it will cost.

At times, we get involved before an art department is even set and, in that case, we will work directly with the script writers and developers in order to help build, step-by-step, a vague idea of what the show’s visual take will be, as the initial script writing moves on. Joel is a designer, and I work more as VFX Art director, so together we are embedded on projects from the beginning and we get to be part of the decision-making process. We’re problem solvers in a lot of ways: things always change as people have new ideas or stunts, and scripts evolve too. 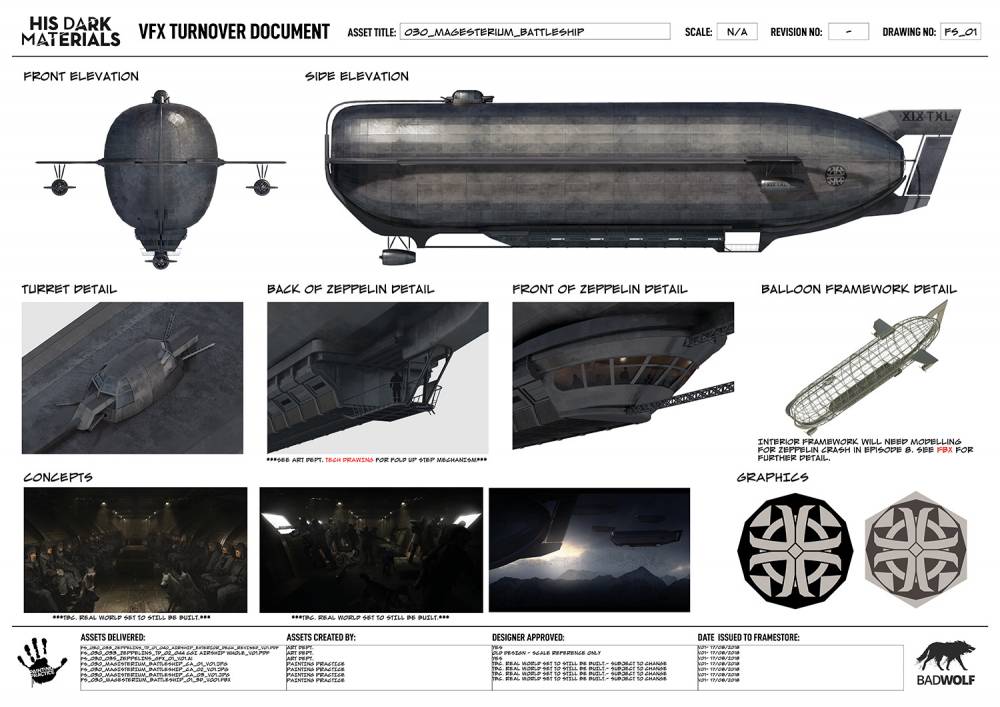 Design sheet concept art of the Magisterium Battleship for His Dark Materials.

Tell us about Painting Practice’s role in His Dark Materials.
Joel Collins is the executive producer and production designer for the show, and I’m the VFX art director and previz supervisor. We’ve contributed a lot of different things to the series, such as designing visual effects, matte paintings and set extensions to creating environment concepts for previz and post-viz, as well as motion graphics. Once everything we do is approved, we turn things over to Framestore, so they can do the final VFX work. Framestore’s VFX Supervisor, Russell Dodgson, is much more involved in the process early on for some key character-driven VFX sequences, so we can figure out how to get the best production value on screen. 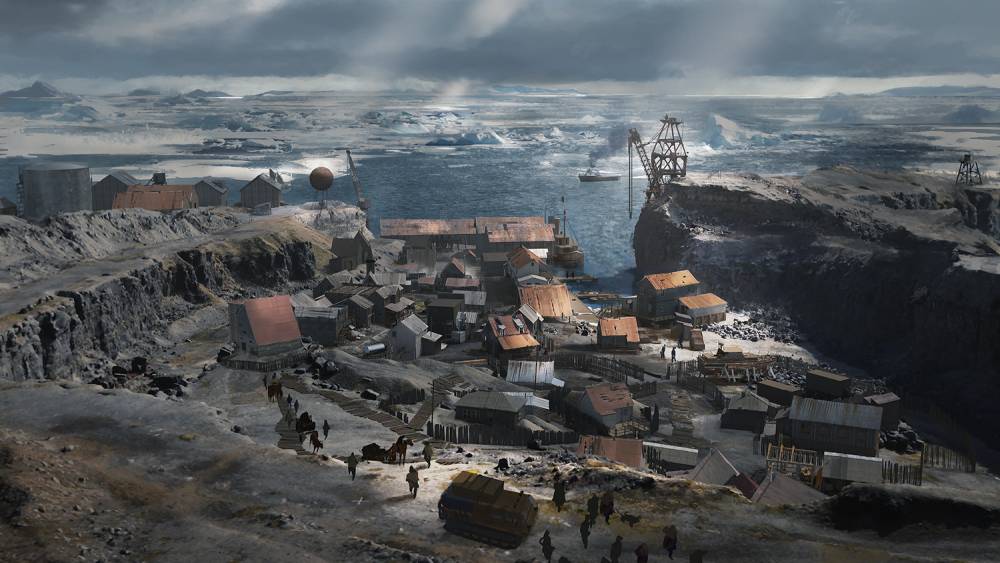 Set extensions for His Dark Materials’ Trollesund were part of the visual turnover pack for Framestore.

We’ve done a lot of work on 3D sets that had to be translated into real builds. One of the most challenging sets we designed was Trollesund, the main port of Lapland in the world of the show’s heroine. We started with a scan of the quarry using photogrammetry drones, which we used to create a high-resolution model to import into our app Plan-V. We started using Unreal Engine early in pre-production for the show. It’s been really amazing to be able to see sets and scenes being pre-visualized and changed in real time to adapt to the needs of the production, the creative and the budget. (Watch the project spotlight here.)

Did you and Joel Collins have similar roles for Black Mirror?
Joel was the series’ production designer, so he did the look and design for the show’s first 19 episodes. My role tended to change, depending on the episode. I guess flexibility is once again key in these types of jobs. We would design and do all of the motion graphics and some of the final shots. Sometimes, I would just be a concept artist or VFX artist, and on other episodes I would be more involved, like on the episode “Fifteen Million Merits,” which I co-designed with Joel. It was a really interesting episode because everybody still has the impression it was CG, but it wasn’t. 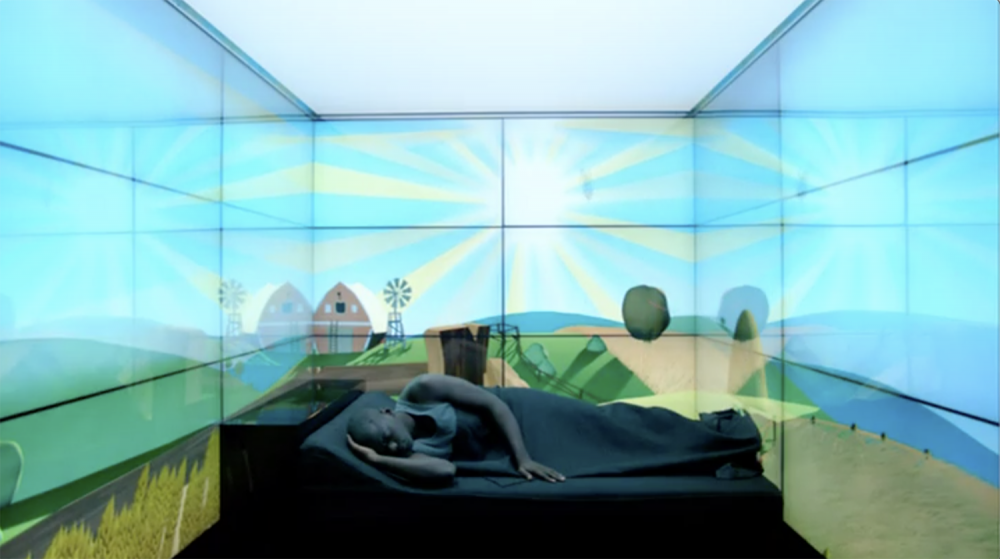 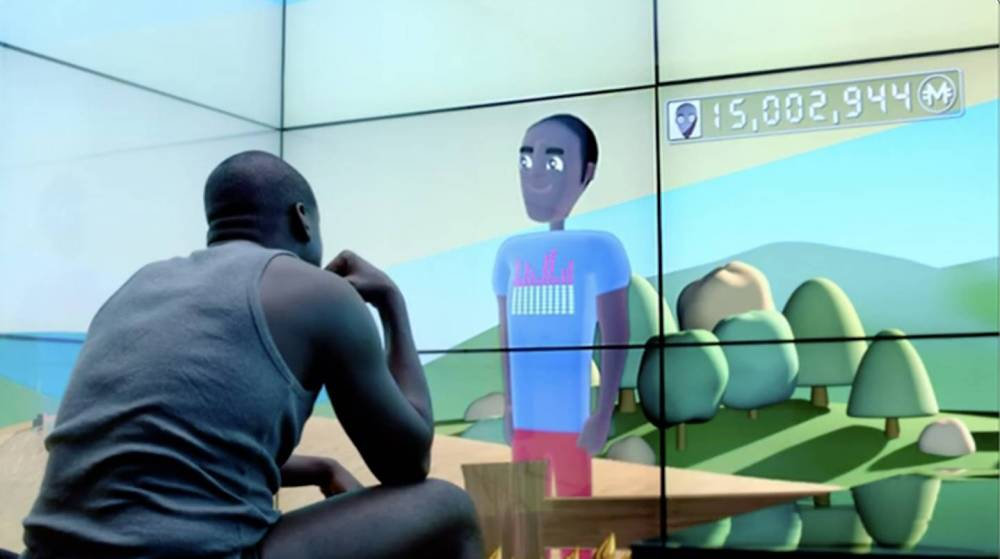 Shots for “Fifteen Million Merits” were all delivered live because they needed a VFX solution that was both affordable and good looking.

We couldn’t do blue or green screen, so we decided to create a scene virtually using a setup of screens that surrounded the stage. The screens were reproducing creative and detailed images, which brought life to the episode and we didn’t have to worry about finding the perfect set. We used software to drive what was playing out on the screens live. We barely survived the shoot, but it worked great in the end.

Another episode I remember in particular was called “Hated in the Nation.” I was the VFX supervisor on that one, and we designed robotic bees that needed to behave recognizably as bees. We also created a number of matte paintings and motion graphics. There’s one sequence where a character is traveling different places in her car and we wanted it to feel more magical, but we didn’t want to do a green screen shot.

So we did a poor man’s Mandalorian and had it all play out at night. Using back-projection techniques, we predesigned all the cameras angles and created CG environments and animated traffics for each camera angle, which could play out on any given screen on the shoot. We could also play out all that were not in shot to help with the scenes lighting and moving reflections on the car, which worked out really well. 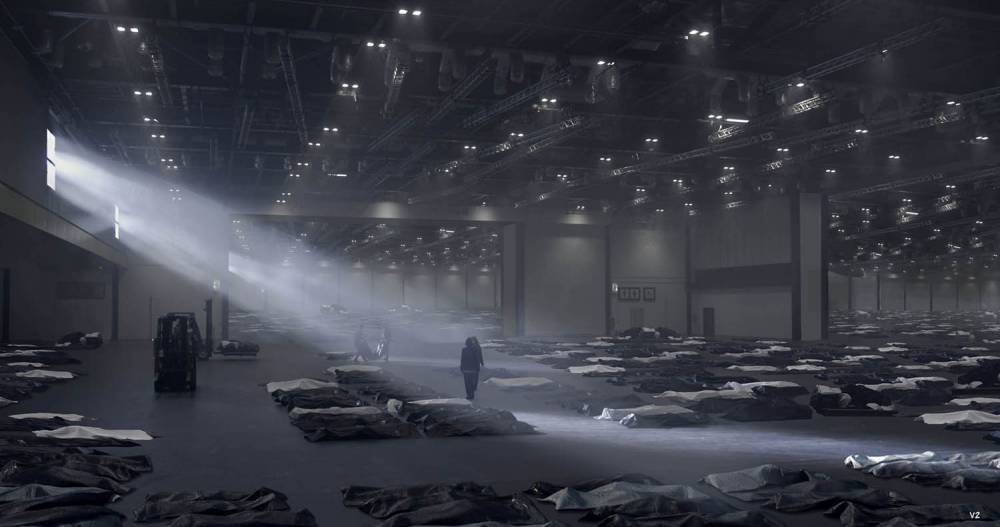 A matte painting concept for the Black Mirror episode “Hated in the Nation.”

How do you see Plan V changing how you work on TV and film projects?
Like I’ve said, the idea of using tech on set is something that has always been a passion of mine. Already, on Black Mirror, which was shot quite a few years ago, I was looking at ways of using software to our advantage and that passion has pushed us to keep innovating. The virus has changed the way many of us work and motivated us to find new ways of creating in isolation, or safely on set.

I hope that Plan-V and virtual production tools will help our industry prep shows remotely in a much more collaborative and enjoyable way. More importantly, once things return to normal again, we will leverage those tools so we can be more environmentally friendly and collaborate more inclusively in areas that, until now, could be seen by some as quite intimidating.