Aixsponza on the Instagram campaign they created for the first-ever electric Gran Coupe.
By Meleah Maynard

For the launch of BMW’s electric Concept i4 earlier this year, the company decided to depart completely from the usual car promo. So, after looking at Instagram for inspiration, they contacted Aixsponza to create five looping animations for social media of the first-ever electric Gran Coupe.

Working closely with BMW Creative Director, Uta Bodenstein, Aixsponza’s goal was to highlight some aspects of the Concept i4 in relaxed ways that didn’t drill down on specific features. Using a combination of Cinema 4D, Houdini and Octane the team spent about three months working on the project, which gave them the time they needed to refine details on animations that were in many ways abstract given that the car won’t go into production until 2021.

“We’ve worked with BMW before, but this is the first time we’ve done this kind of social media campaign for them, and it was so nice to be able to play around creatively and do something different,” says Matthias Zabiegly, Aixsponza’s 3D lead on the project.

Creating a Sense of Mystery
In August, Aixsponza took home a prestigious Red Dot Award: Brands & Communication Design 2020 in the “Best of the Best” category for their work on the BMW project. “Which was quite an honor,” Zabiegly explains, “because communication design was exactly what we were aiming for. We were not just creating a random, ‘cool’ animation for Instagram, but something that actually fit well without client and their brand.”

Along with a teaser, featuring a Houdini fluid simulation made by two artists they brought onto the project, the Munich, Germany-based studio created four separate animations for use on Instagram. Aixsponza modeled everything in the animations from scratch, with the exception of the car and a few plants.

BMW provided high-resolution CAD data for the car, which was imported into Cinema 4D. The team also received a file telling them the specific materials they needed to use for various elements of the car, as well as actual samples of cloth and paint. The setting was inspired by images from an earlier BMW photoshoot in the Palm Springs area of California. “It’s always nice to have real-life samples and images to work with so there isn’t so much guessing about what things should look like,” Zabiegly says. 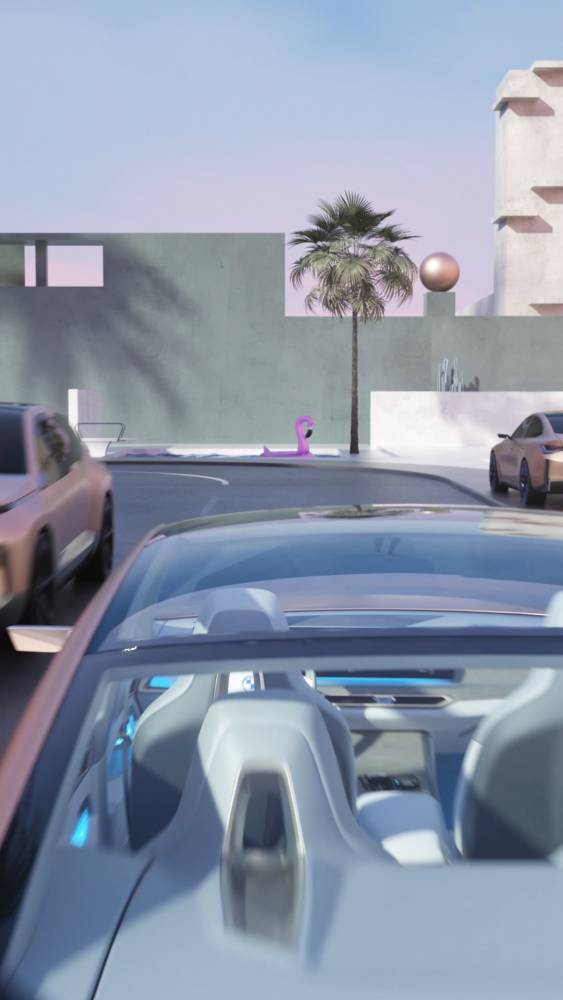 The Bakery animation was the most involved and imagines a futuristic mass production line where the Concept i4 is baked like bread by the energy of the sun. One of the trickiest parts was figuring out how the bakery tray would work. After that, the team moved forward on all of the mechanics, Zabiegly recalls. “It was quite a long process because it was all fresh and new and we had to think of every tiny detail for ourselves.” Pouring the liquid into the baking try required a combination of techniques, he says, explaining that the first five seconds was a Houdini fluid simulation followed by traditional animation using standard geometry and Volume Objects in Cinema 4D as the bread is baking and moving under the knife. 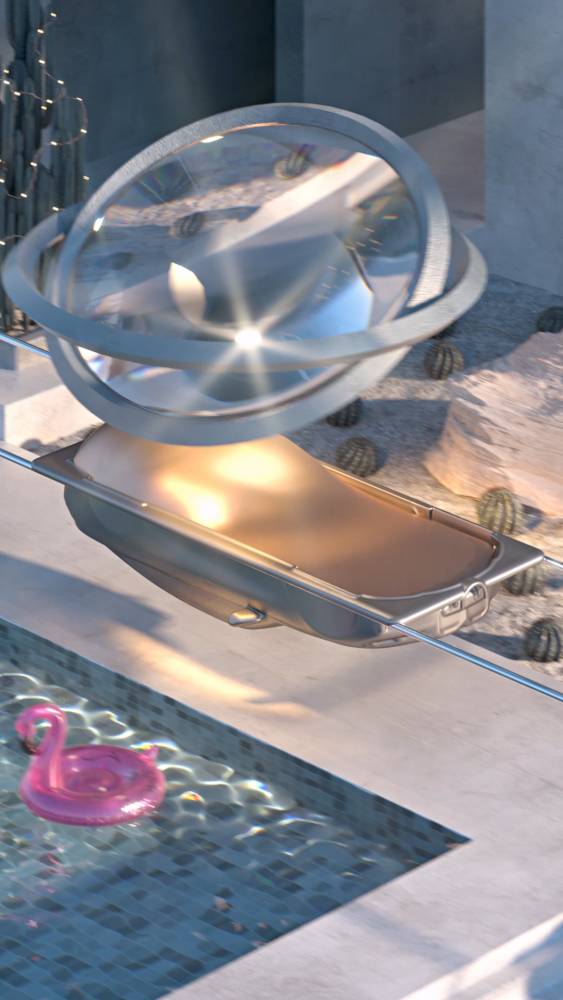 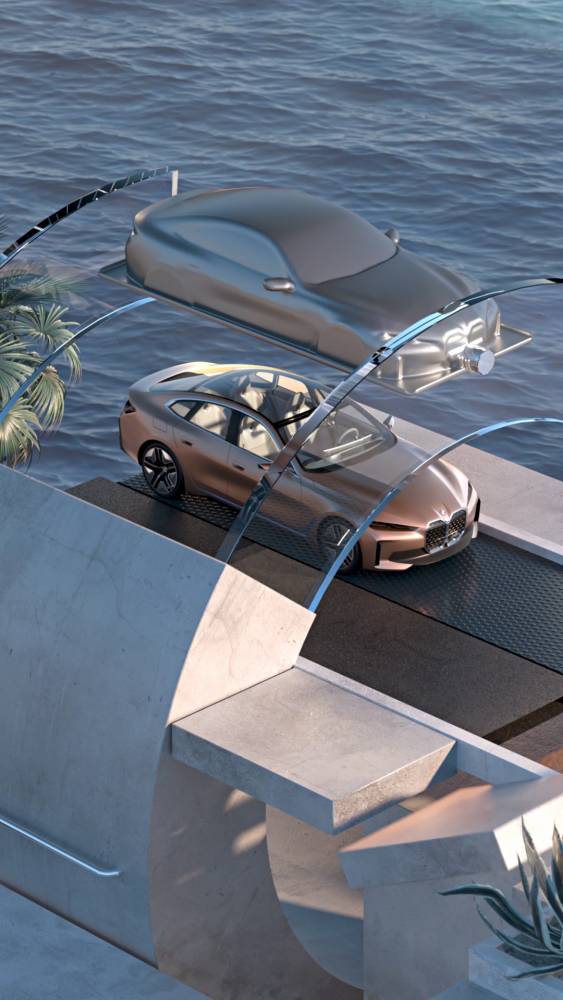 Zabiegly did most of the work on the Obstacle Course animation, which shows off how the car’s user interfaces and control panels help drivers handle any situation. “The idea was to show that it’s a smart car that recognizes its environment,” he says, adding that he used Cinema 4D’s Fields to create the cutouts that the car drives through while navigating the course.

The Materials animation highlights the Concept i4s exceptional quality. Without giving too much away, the promo zeroes in on an array of the most high-end materials that make up BMW’s electric car. The Aixsponza team used shader balls they created to form the shape of the car with C4D’s Rigid Bodies. The actual car is shown only in refraction, adding to the sense of mystery. 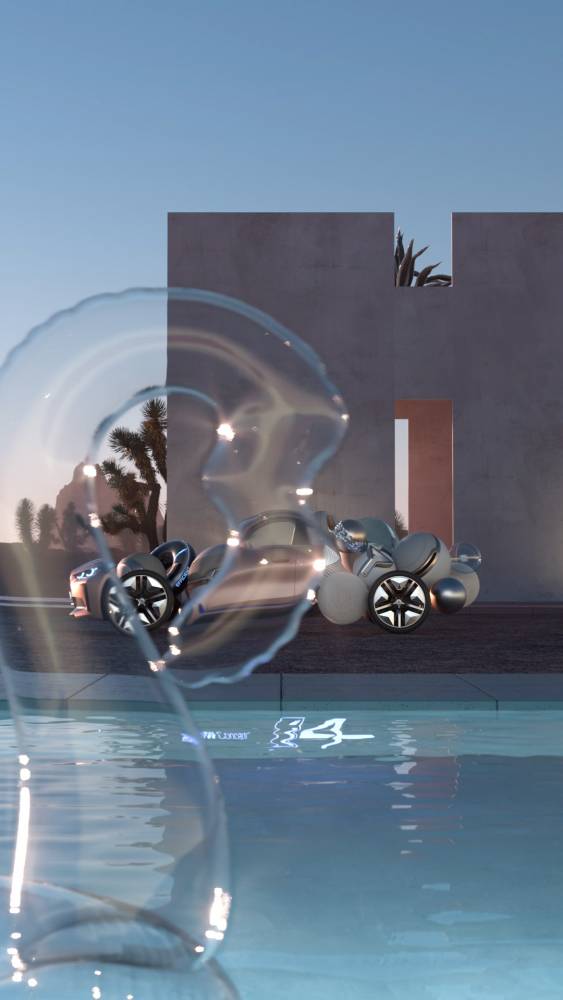 The Symmetry animation started out as a test that didn’t go well, Zabiegly says. The idea was to show car from every angle, but simply rotating the camera 360 degrees or showing the car vertically didn’t work. Then someone suggested duplicating the car and rotating them in opposite directions. “We had to remove a few parts from the car in certain areas to make it appear cleaner but, basically, it was serendipity how it worked out and no matter how you look at the BMW Concept i4, it’s one hell of an electric car.

Working with Social Media in Mind
Aixsponza doesn’t work on projects that are made exclusively for social media very often but, when they do, things always go best when the idea doesn’t need to also work on TV and other platforms. Being able to create the BMW project only for Instagram gave them the freedom to tailor the animations to that platform’s format—more of a square than a traditional landscape or portrait. The team also kept in mind that Instagram’s audience is usually younger and more tech savvy.

“They want things that are shorter, things that they can see quickly, so the first 3 or 4 seconds are the most important,” Zabiegly says. “If you have clients who can commit to doing something only for social media, the outcome is almost always going to be better because you can approach the project in a more focused way.” 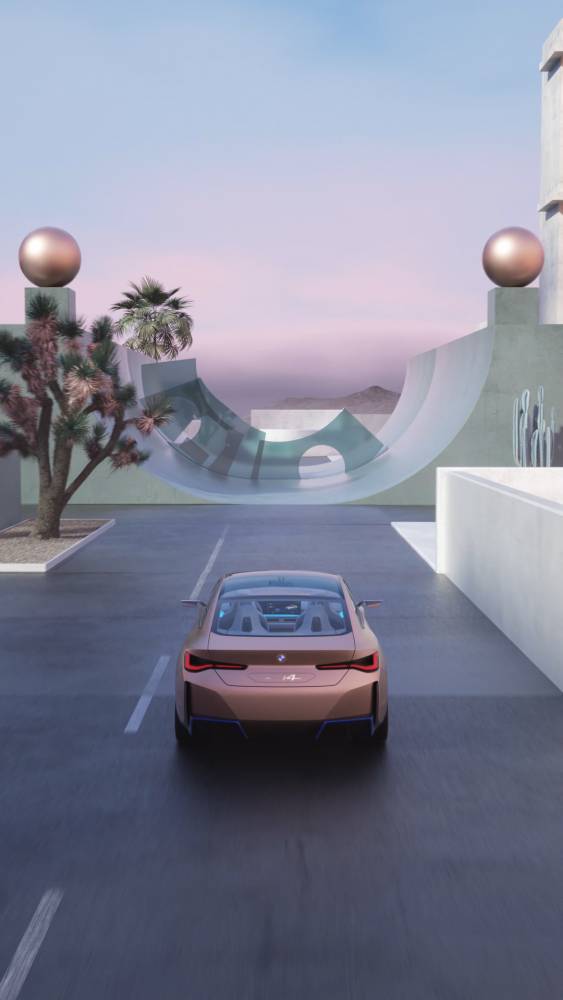 Knowing that looping videos are a popular trend on Instagram these days, Aixsponza worked to make all of the BMW videos loop seamlessly too. Technically, that wasn’t as simple as it might seem, Zabiegly recalls: “It was a bit difficult because a lot of stuff is going on, and we had to make sure everything matched after 15 or 20 seconds of animation. Every pixel had to be the same as it was at the first second of the video so nothing jumped, including lighting and shadows, or the loop would fall apart.” That was particularly challenging with the fluid simulation, but the team figured out how to make it all work.

Ultimately, though, this project was remarkably free of problems; in part because of the ease of working with C4D, Houdini and Octane, Zabiegly says. But it also helped immensely that BMW was a great collaborator. “This was not a project that could have been rushed, and it was great that their creative director worked so closely with us. Both companies are based in Munich, so she would just come here and work in our office. It helped that she had a background in film so, even though she didn’t know a lot about 3D, she gave us a lot of valuable input from a film perspective. We had a lot of great conversations together.”