Inside the creative mind of DXTR

DXTR the Weird is a Berlin-based artist and freelance illustrator. Starting out as a graffiti artist, he now works for multiple brands and is one of the founders of the art collective THE WEIRD. Translating his style between wall and print, DXTR is a well known entity in the Forward universe. We met him after his talk at Forward Festival Vienna 2018 and asked him some questions.

Whilst playing with the colored clay masses we handed him, the german-born artist thoughtfully answers our questions, constantly having a smile on his face. He tells us that playing with clay reminds him of his time at university, since he is a character designer, he used to build massive sculptures out of it.

“What am I doing here?” – DXTR suggests to ask yourself that question in order to be able to deconstruct and question yourself all the time, referring to Paula Scher, one of the female grandmasters of graphic design, always redefining herself. He himself tries to keep moving by a cycle of 3 years, altering and changing his ways of work to keep the passion and fire going.

“Sounds stupid, but there is nothing else in my life than creating.”

He stays true to his passion, telling us that after working on the computer for hours, everything he longs for is to go out and paint a wall with friends. And that’s what he ends up doing, finding a balance between work and spare time, always having a sketchbook on hand.

The graffiti scene referred to character painters as literal „background bitch“ for a long time, he got fed up with this connotation and found a crew that wasn’t timid to think of it the same way – founding THE WEIRD, having everything melted together. He says the most intense part of working in a team is just going with the flow, without too much planning done beforehand, really getting to know a person from the other side of the world, having the same passion.

„Right place right time!“ – that’s what he says about being directly approached by big companies like Nike. He suggests it might be coincidence, but all the companies were “friendly and open to his stuff.” He still doesn’t have a website to this day. Talking about the collaboration with ESPN’s magazine, being one of the leading sports entertainment networks worldwide and gushing about being able to do 3 or 4 sessions a year for them, also working with the NBA team Golden State Warriors, sincerely enjoying it since he was a basketball player for 15 years. 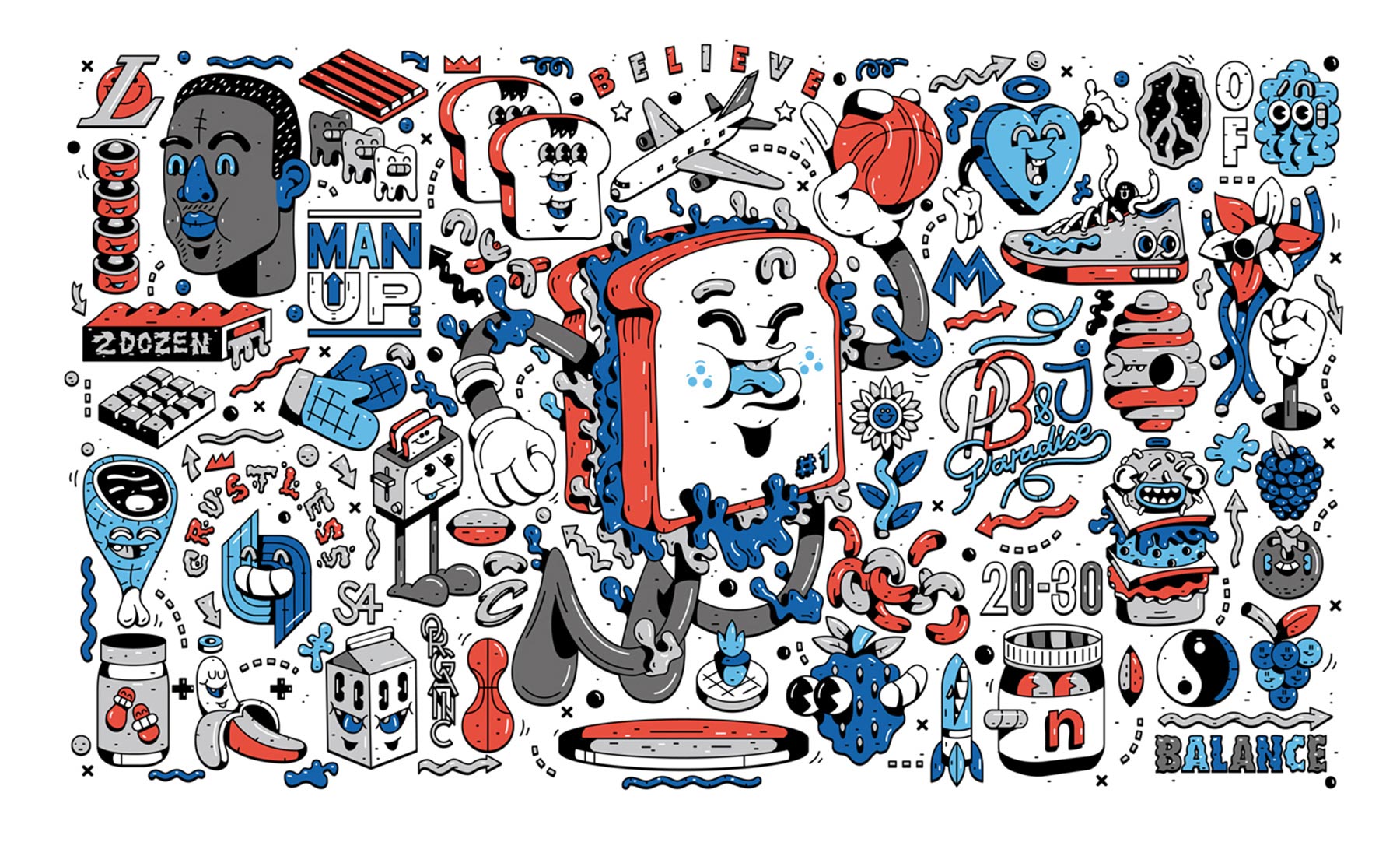 “I’d call it pop surrealism – it’s a mixture of pop cultural stuff mixed together with a graffiti attitude!”

Defining his style and graphic design heritage, the mixture of typography, comic and digital elements as pop surrealism.

The last words are the ones that really stick, giving advice to young artists at the beginning of their career – „Stay true to yourself, get influenced but not too much. If your heart’s in it, the people will feel it. You just go for it and you will get better and better.”

Thank’s for that Dennis!