“Each work that I create is based on memory”. – In conversation with Stefanie Moshammer

Are you ever struck by the transcendent mysticism of life and the human condition? Stefanie Moshammer explores these little moments of wonder through memories and formulates them to the outside. Incorporating photography with moving images, pre-existing material and textile elements, Moshammer’s work reveals various life structures, sparks intrigue and a warm rush of feelings. Her ability to make subtle observations shines through her personal work and collaborations with Harper’s Bazaar, Atmos, Fendi, Numero China and many others. We chat with Stefanie about her visual language, workflow and insights on her latest solo show.

Stefanie Moshammer will speak at the Forward Festival Vienna in October. Next to her, you will be able to hear Creatives like Kelli Anderson, Erik Kessels, Kelly Anna and many more.

Shaking up the past, what or who do you think influenced your style the most?

This is something that changes constantly. I think it doesn’t stay or stick to one person. It’s really fluent as well as my own approach and style which is always changing. Some names are popping up over the years, but from the first style in the past, there is no one anymore that I would now consider influencing me. Also, my education, background in textile and graphic design comes to mind, I guess that is something that collates together later on. Now my work is hybrid in terms of what I did before and how I perceive it now, so I think it’s more about what you did before, how you got to your career and how people that you met left traces on yourself. It’s so natural, and sometimes you don’t even know so much about how inspiration comes together or how certain things influence you. 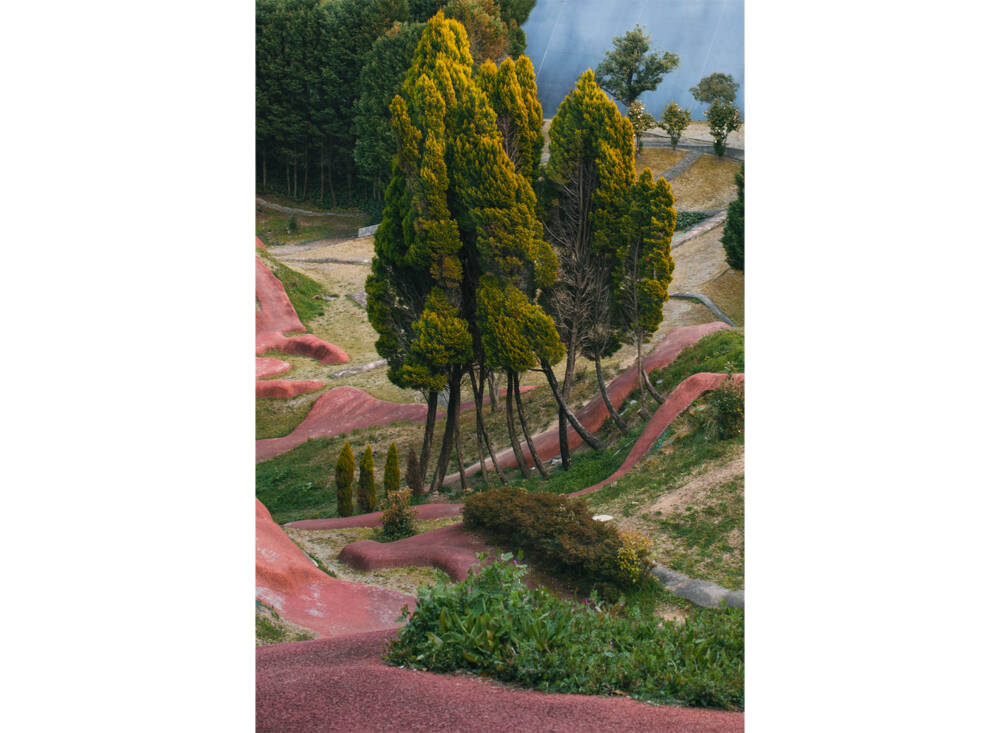 Your work is deeply intimate, intricate and sometimes quite long-lasting. While it’s stretching over the years and tackling sharp issues, where do you find the motivation to keep going and not lose the passion after years of working on the same topic? How do you recharge?

The thing is I’m not really working on one topic over the years. I have more or less one aesthetic but topic- and content-wise my work is changing and restructuring, which always keeps me working. I know there are some artists which mostly are working on one topic that pops up in their work over years. But for me, it’s about catching up on the topic, working on it, and then closing up a chapter and starting on a new one. Sometimes it’s based on a place or certain people, so I guess it’s more the approach that I have to work in terms of how I start, make research and get it all together. It’s always a challenge that you put on yourself, which keeps you working and you don’t get bored. I do both personal and commission work, which is also stimulating. Currently I also teach in an art school, so all these things push you to do what you do.

Are there any tips for pumping up an aesthetic vision and creative flexibility? Tell us more about your interests beyond your practice which inspire you the most.

It’s just about staying curious on everything that happens in the world, not holding up too much in your own bubble, and being surrounded by people that have something to do with things completely beyond your own practice. If you have a possibility, traveling also always changes your environment. Also, my interests come from cinema and movies. I love nature, I do sports a lot. I go jogging every day in the morning and I start my day by running for one hour and then I can start with whatever I do. 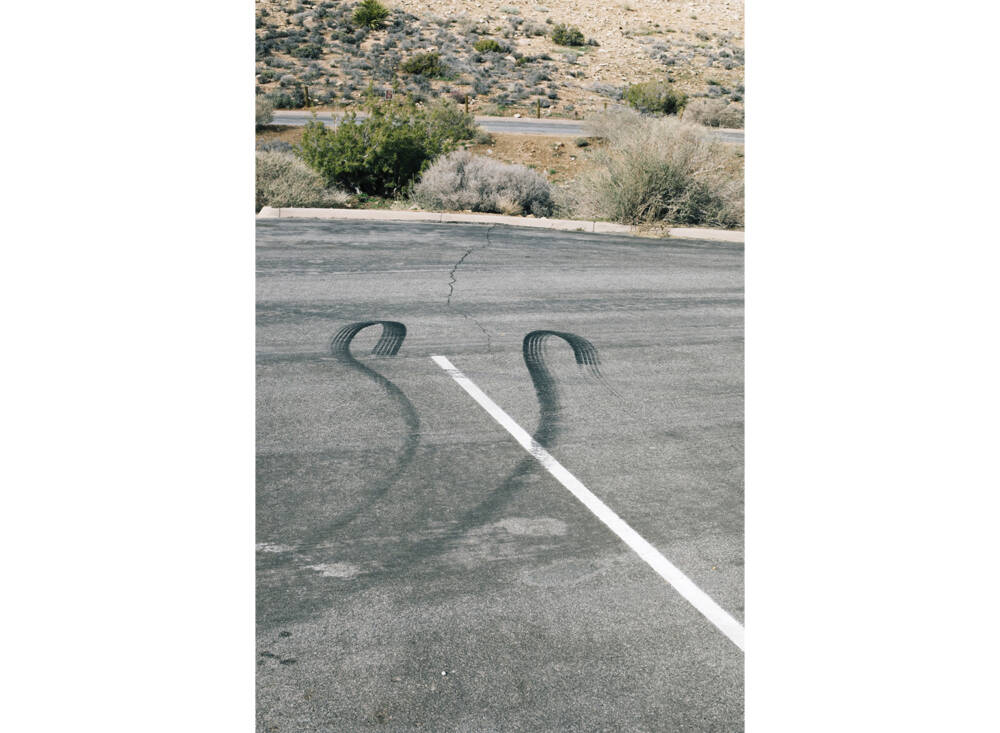 You said that your practice is also an attempt to form an internalized repertoire of memories so that to formulate them to the outside. Can you expand on this?

I would say that each work that I create is based on memory. Everything comes together through my own experiences that I had, so it’s really connected to personal life in certain circumstances and how you put this to the outside afterward. At a certain point, I’m trying to create work through my own memory, my language comes from what I experienced before.

Your work varies naturally from documentary to conceptual genres. What’s the starting point for a project you embark on?

Well, some projects come to me coincidently, some – because it’s time to work on it and I really wanted to embark on them for a long time. It always starts with doing research, reading about a topic broadly and collecting things. With commissioned work it’s sometimes a very short task, which I find quite refreshing because you don’t work on something for too long and it’s more like small chapters you keep on passing. 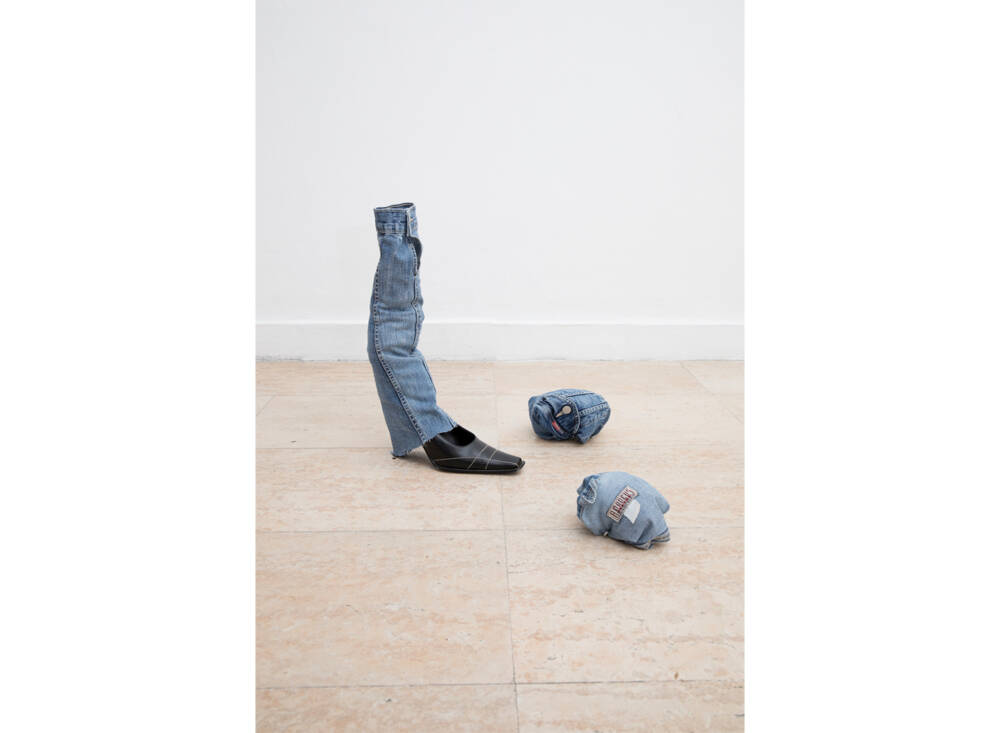 How does your approach to commissioned work differ from your personal projects?

Definitely, as mentioned before, the duration you work on it, the timing. If I work on my own projects, it mostly goes over some years. But visual-wise you sometimes cannot even see the difference between them. Also, in commissioned work there is always someone who has certain expectations and you have to make someone happy whether it’s a client or a magazine, so with personal projects, I think you deal with your own expectations and then you hope that you will find an audience for it. With commissioned work you also have to satisfy yourself first and then someone else, because if you don’t like the work, then the client doesn’t like it either.

Let’s get down to the Harper’s Bazaar US collaboration. What did the workflow look like?

There was a lot of freedom. They just say this is what you are supposed to shoot and then I brought the mood board, ideas and the concept. Since the brands I shoot with, represent a kind of inclusivity, poshness and elegance, I thought would be nice to break it with an environment that I chose to shoot in. So, I decided on the countryside where my family is from, the farm of my aunt’s brother, which is very familiar to me.

Sometimes the most exciting thing about commissions is when you don’t have much of a plan before, having the freedom of exploring the location. So, I used this raw environment in contrast with these fashionable brands. 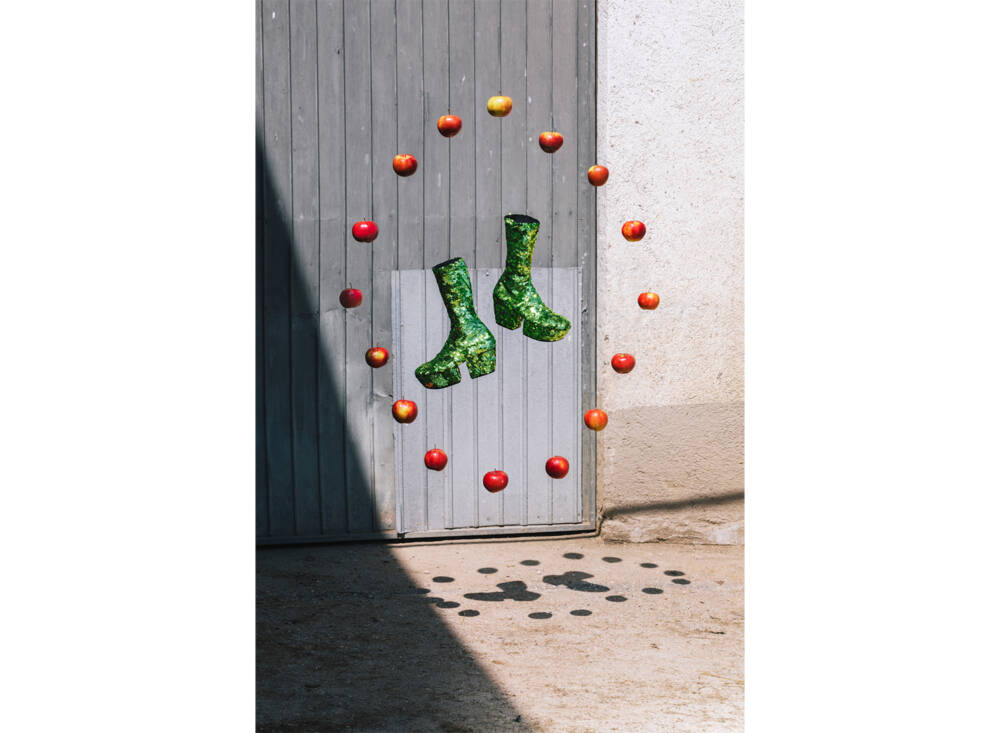 What are the things which always on set with you during the shootings? Tell us a bit more about the technical side, and how it’s important for you while creating a perfect image?

Onset with me is always a good assistant (laughing). I try to really be as minimal as possible when it comes to technics. I find myself overwhelmed when I have a lot of equipment or lightning, and I try to focus more on an image itself and less on how to create it or which artificial light I want to use. I don’t shoot much in a studio. I also mostly use one camera and different lengths depending on what I want to shoot and I make it always digital. I never do analog now, because it’s a lot of images I make, so it doesn’t really fit the production side, and plus I love the possibility of choosing among a lot of images and it doesn’t do well with analog. In the end is not much about the image-taking during the process, but about the editing process afterward, when you narrate your images and go through them – it’s where the creation starts. When I shoot, I think less. 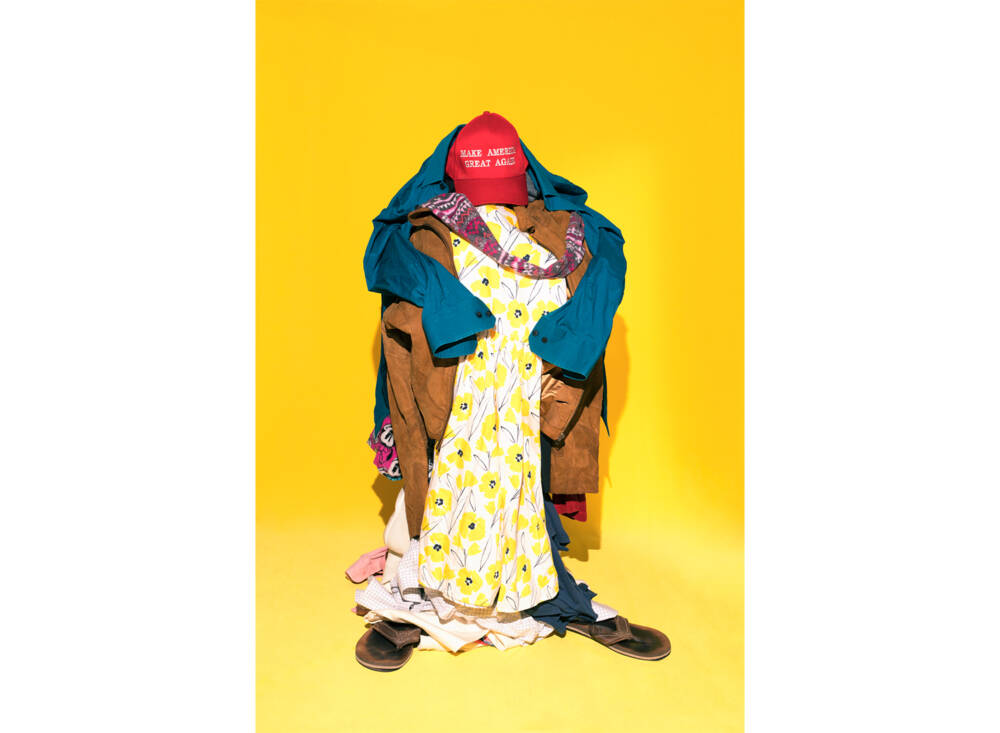 Your latest project and solo show Each Poison, A Pillows is a very personal story on female alcoholism and the relationships between mother and daughter. Can you tell us more about your research process and how did your mom react to the outcome?

Well, my mother was closely involved in the process, it was almost like teamwork. Since she is the main protagonist in a project, it was really important for me to work with her and that she feels comfortable, otherwise it would have not been possible for me to work on it. Even at the exhibition opening she was there and felt quite relaxed with everything. Now she can talk about her alcoholism openly and deal with it in a very mature way, but her addiction is not in the past.

All my works are somehow personally related, but they don’t always reflect on my personal life, so that was the first work that was connected to my own history. Of course, I didn’t feel comfortable from the beginning, but now while I keep working on it, I’m okay with it. For me, it was important to put light on something that doesn’t get a lot of attention, and when you talk about alcoholism among women there is mostly a daughter involved and that’s why I also chose to work on it with my mother and not just to express myself in the topic.

The research was based on a self-written letter from when I was 8 years old, which I found at my parents’ place recently, and which was the starting point of the work. My research began from an individual perspective though I’m aiming to contrast it with a collective perspective, which goes beyond my personal experience. To understand the topic better. I f. ex. started talking to therapists, I read about alcoholism issues from a medical, cultural and ritual perspective, I visited the department of anatomy, etc., and then I tried to incorporate this all into visuals. 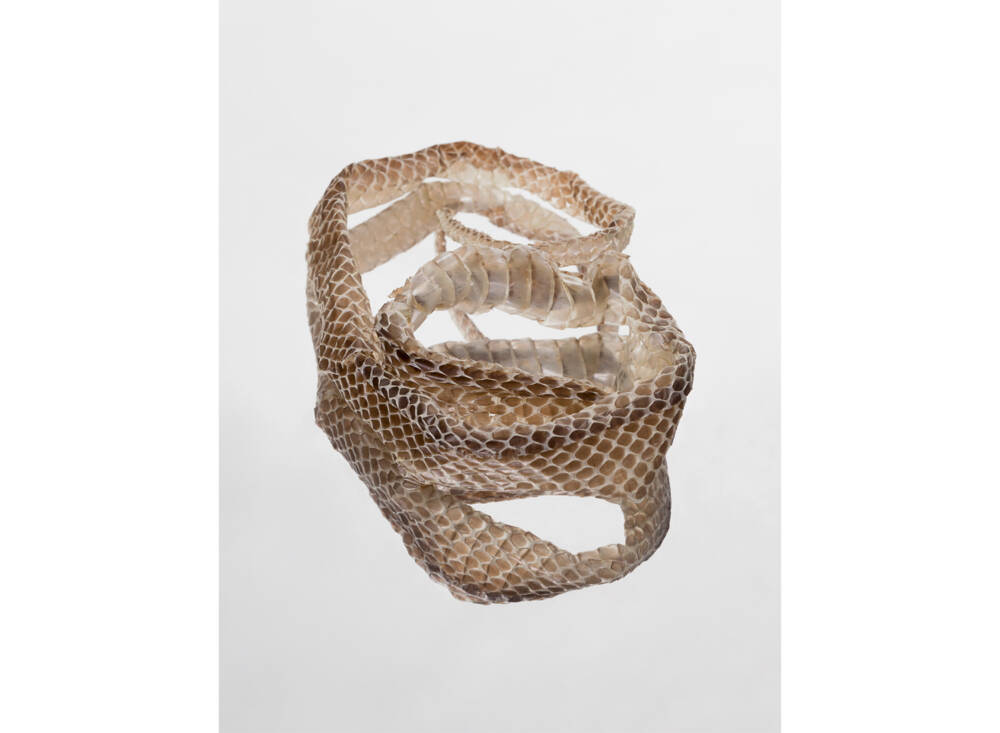 How would you describe an Austrian visual art scene and what needs to be improved in it?

I find it mostly quite academic. Here, especially in Vienna, it always counts on what university degree you have whether you go to Angewandte or Bildende, which network you have etc. And then people stay in these bubble circles. I also applied at Angewandte, but they didn’t take me, and then years later they offered me a position as a guest lecturer in photography class, so I found it quite funny when you still get there after you have once not been taken, but yeah… Regarding the photography scene, it’s leaking. There are, of course, some good galleries, but we still don’t have a photography museum, so I think Austria and Vienna are more exciting for the fine arts.

What’s up next? Are there any projects you still have been dreaming to realize?

Right now I’m working on three projects at the same time, so at the moment I’m not really on other projects I want to start with because it’s enough (laughing). Sometimes my year is fully planned with certain things like having exhibitions, making photo books and doing commissioned work. And when speaking about goals, of course, I would love to have solo exhibitions in certain museums and institutions, and things you haven’t achieved yet keep pushing you. But at the same time, I don’t always think about the final goal because it also would block me. So, I just try to enjoy more of the present and not concentrate on what I haven’t achieved yet. 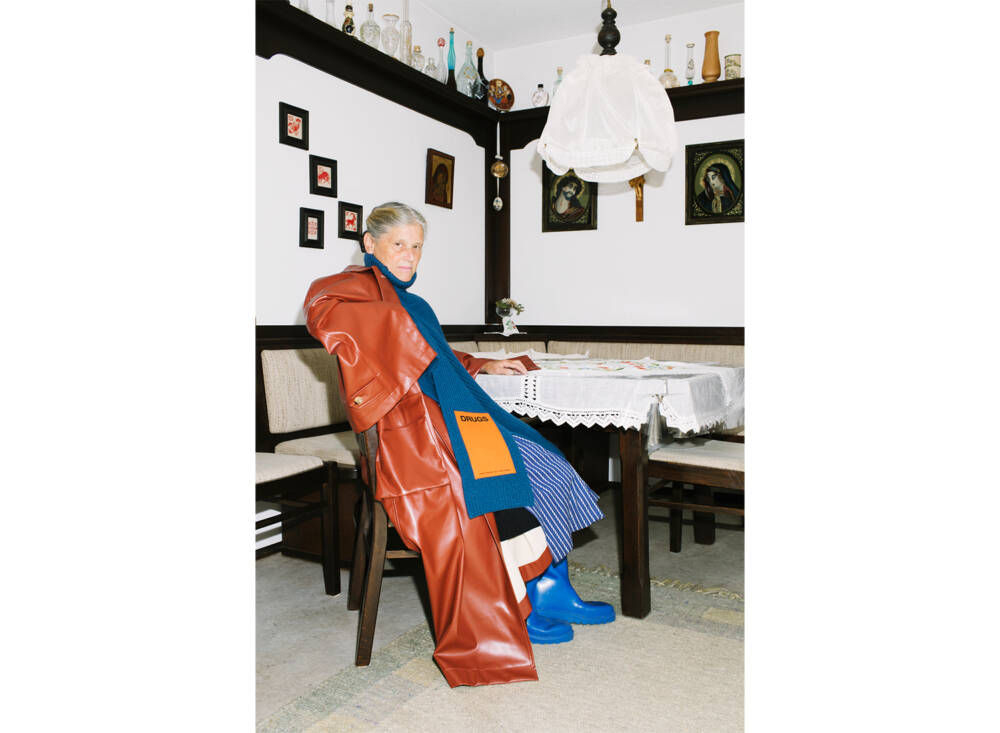 Stefanie Moshammer will speak at the Forward Festival Vienna in October. Next to her, you will be able to hear Creatives like Kelli Anderson, Erik Kessels, Kelly Anna and many more.